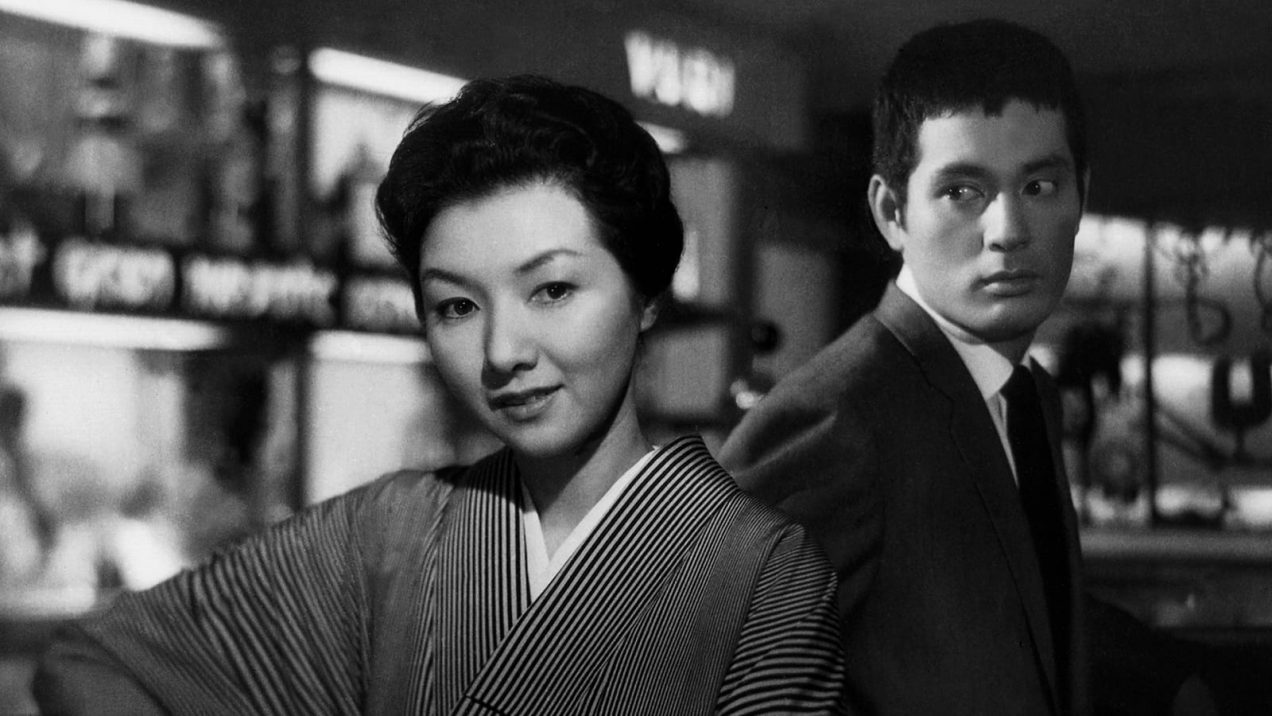 Mikio Naruse’s When A Woman Ascends the Stairs is a very depressing affair and it should be for two reasons. First, the people in it are very broken. These are not the down-and-outs of Shohei Imamura’s Pigs and Battleships, though they nearly could be. They live just above the poverty line as hosts, hostesses and managers in postwar Ginza as the country slowly recovers from the Second World War. While others could use the money these workers make to keep themselves in a comfortable spot, the realities of entertaining rich men in basement bars means they are constantly running up bills they can’t ever pay off. And if they slip for an instant, they really will join the cast of Imamura’s bleak vision.

But in Naruse’s film, people fall but they to be respected, not pitied. The girls who ply their affection on old, foolish, and rich men smile and then sigh when the patrons go home. They complain to each other but take their problems to ‘Mama’ Keiko (Hideko Takamine). She listens, advises, then goes home to a very quiet and bleak life. Having lost her loving husband a few years earlier, she is desperate to escape the trap of being a hostess, and manoeuvres her way through each day hoping to find the right way out. Along the way we’ll meet her friends, patrons, admirers and lovers. They all have flaws, even if they are not immediately apparent.

Which brings me to the second reason why this is a depressing affair: Naruse knows a lot of his cast won’t get what they want and he’s not interested in taking any of the easy ways out. So if you didn’t like the fact that one character dies or another gets run out of the business, don’t get too attached to anyone. The director did not take up the problem of how to depict the black, inky murk of Tokyo nightlife only to hold back on hammering the people in his story. Even our main character, though she’s played with such quiet, desperate heartache by Hideko Takamine, can’t escape the axe that Naruse is wielding. Whereas other directors would show little quiet moments to alleviate the stresses they put their characters under, Naruse uses them to illuminate their lives, balancing it with the darker moments. Those darker moments blindside you because there’s no warning when they happen. It’s everything from girls sleeping with the manager who won’t commit to them because they see them as easy to suicide over insurmountable debts. They flow as easy as the coy, bubbling dialogue between Keiko and her patrons.

The film’s visual style is very low-key, with no major camera moves, using one-on-one camera shots as dialogue gets spoken to us directly but the characters keep looking at each other. Unlike Yasujirō Ozu’s style, where characters look directly into the camera, Naruse backs off to a certain degree. He’s happier to have his characters react to events, rather than being in the centre. Events happen off-screen, characters are forced to deal with them. Major emotional problems boil over long-standing arguments between characters. It’s a very specific style of direction and it works because Naruse is completely in control of his production.

The emotional stakes in the film are very well camouflaged. At first, the major problem for Keiko is the bills she’s facing as the Mama of the hostess bar. She deals with the girls, her manager Kenichi (Tatsuya Nakadai) and the patrons and comes home, counts her tips and gets ready for the next day. But as the film plays on, we see how life for a woman in Ginza is, literally, impossible to survive. Keiko watches as former employees leave, die, or find better fare elsewhere. At the same time, she tries to make plans to buy her own bar and hopefully break the cycle of debt and servitude. But her family lie like a landmine in the road and when they turn up (coincidently when Keiko is recovering from illness at home), it hammers her so badly that she starts making decisions that she would never beforehand.

This starts a vicious cycle (mirroring the overall plight of women in Ginza) where she digs herself out, someone comes looking for money or favours, she digs herself out and the whole thing starts again. The men in the film make decisions without any care of what will happen to the women in their lives whereas the women have to think of other people’s concerns before their own. As the film moves on, this pressure pours on Keiko and she finally cracks under the strain. Naruse then takes his time to unfold every page he’s been putting on the table and tells us where our cast are in their lives and how far away they are from each other.

I liked When A Woman Ascends the Stairs and felt it was worth waiting nearly two years since I came to know about to see it. It’s a perfect drama with actual stakes where the problems of the world are all manmade and people get hurt as much by inaction as action. Hideko Takamine is perfectly suited as the worldwide and world-weary Keiko while Tatsuya Nakadai is a character study in contempt, ego, and unrequited love. Naruse makes full use of both as well as the rest of his cast and tells his story, quietly and stoically, with real people as his stakes.

When A Woman Ascends the Stairs is now streaming as part of BFI’s Japan 2020 lineup.