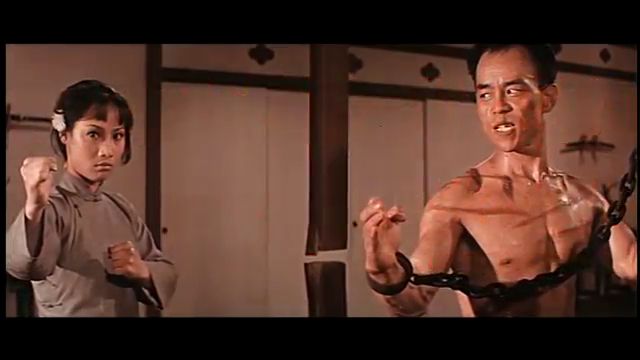 When Taekwondo Strikes is another classic martial arts film re-released on DVD by Joy Sales, this time from back in 1973. The film is a real treat for martial arts fans, serving up an incredible array of talent, including top female genre fighter and international cult favourite Angela Mao (also in the likes of Broken Oath, Hapkido and The Stoner, in which she was originally set to star with Bruce Lee before his untimely death), Carter Wong (known for The Blazing Temple, The 18 Bronzemen and other hits), Korean martial arts master Rhee Jhoon Goo, here making his one and only cinematic appearance, and even Sammo Hung in an early villainous role. It was directed by Huang Feng, a genre veteran who had worked with Mao on a number of productions.

The plot is classic kung fu, set in Seoul during the Japanese occupation of Korea and following a band of nationalistic resistance fighters led by Lee Cheng Tung (Rhee), who struggle against their oppressors using Taekwondo. After the Japanese pursue the rebellious Kim (Wong) to the catholic church where the resistance is hiding out, a battle breaks out which eventually involves local Chinese girl called Sister Wong (Mao), who luckily happens to be a skilled martial artist herself. Joining up with the Koreans and a Western woman called Mary who has been trained by Lee, she helps them to victory and later to escape to China. Unfortunately, Lee is captured after he attempts to free an imprisoned priest, and so Sister Wong, Kim and Mary launch a daring attack on the Japanese headquarters.

Huang Feng is one of the great unsung martial arts directors, and When Taekwondo Strikes is one of his most energetic efforts, with plenty of fluid camera work which makes it exciting to watch and far less stoic and static than many of the Shaw Brothers productions of the same era. The martial arts choreography is energetic and thrilling, with lots of wild brawls, usually with one of the protagonists taking on hordes of sword wielding Japanese assailants. The stars all turn in great, dynamic performances, especially the beautiful Angela Mao who shows exactly why she still remains an incredibly popular genre figure, spending a fair amount of the running time throwing poor Sammo Hung through paper walls. The action comes thick and fast and is frequently intense and quite bloody, something which along with a few scenes of surprising nudity helps to give the film an effectively visceral edge. The soundtrack also adds an air of excitement, though some viewers may be amused to recognise parts of the score which have been rather liberally lifted from several Hitchcock productions including North by Northwest – not necessarily the most obvious match for a martial arts film though it works well enough.

Although the plot is pretty basic, with noble heroes who are only too willing to lay down their lives for each other and who have a tendency to make heartfelt nationalistic speeches whenever faced with danger, it works well as a traditional tale of good versus evil. This is mainly since the Japanese in the film are a particularly nasty bunch, leering and always on the lookout for comfort women and not above beating up and even killing defenceless old ladies. There is an interesting religious subtext through the character of the brave Western priest who bravely suffers under the Japanese tortures, providing a comparison with the different ways in which people are willing to sacrifice themselves for what they believe. This helps to lift the film above being a mere fight flick, adding a certain level of depth and underscoring its international flavour.

When Taekwondo Strikes is certainly a very welcome re-release, and is a definite must see for all martial arts fans, and especially for anyone yet to be introduced to the lovely and feisty Angela Mao. Well directed and boasting an unbeatable cast, it has stood the test of time and still entertains every bit as much today as it did during its original release.

When Taekwondo Strikes is released on UK DVD on Monday 27 July 2015 by MediumRare Entertainment.

A version of this review previously appeared on BeyondHollywood.com.

2 thoughts on “When Taekwondo Strikes”