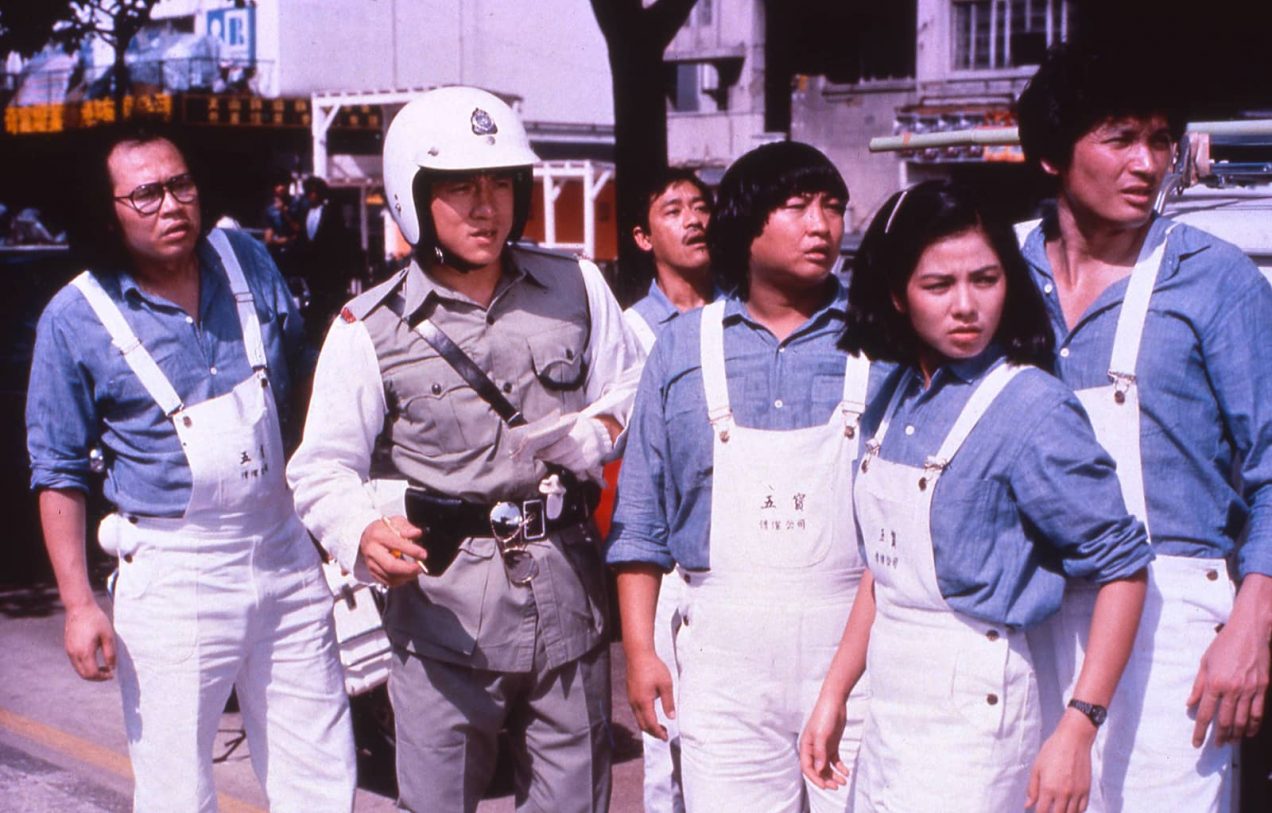 The first of an only-just connected trilogy is a physical and roaring comedy, drawing on silent comedy slapstick and HK action in equal amounts…

In its best moments, there’s a purity to Winners and Sinners. It’s a film whose sole purpose is to entertain, and it manages that effortlessly (for the most part). The goal from the outset with Winners and Sinners is simple: take an A-list Hong Kong cast, give them some slapstick comedy sketches to perform, and then mix it in with some kung-fu choreography and impossibly dangerous stunt work. The commitment to playing to the rafters is apparent from the off, and a key part of the appeal.

The plot is episodic and very loose, little more than an excuse to connect the film’s gags together with its action set-pieces. We’re introduced to a rag-tag group of petty thieves one-by-one as they’re arrested, all given nicknames – the put-upon Teapot (the film’s director and star Sammo Hung), the talkative Exhaust Pipe (Richard Ng), de-facto leader Ranks (Stanley Fung), ladies’ man Vaseline (Charlie Chin) and activist Curly (John Shum). Leaving prison, they set up the Five Lucky Stars cleaning company with Curly’s sister Shirley (Cherie Chung). Somehow, they get embroiled in a gangland dispute, which brings in Jackie Chan’s error-prone cop (but only just – his involvement in the film’s plot is essentially non-existent, serving more as action relief).

The film’s gags are broad and bawdy, making great use of the cast’s considerable talents in comic timing – it’s been a while since I’ve laughed so hard at a film, to the point that it’s easier to forget just how hard it is to craft effective comedy onscreen. The bawdiness does have drawbacks – some of the humour is blokey and has dated badly as a result; the gang’s constant chasing after the beautiful Shirley gets a bit tiresome at times (though Chung handles herself with grace).

The action scenes are not as frequent as you might expect compared to other Hong Kong films of the period. It takes fully 40 minutes until the first proper fight scene, an attempted robbery in a fast-food restaurant foiled by Jackie Chan and Sammo Hung. When those scenes do come through, they showcase all the hallmarks you would expect of Chan and Hung’s styles – physically demanding, use of the environment, and stunt work that’s not so much stunt work as actually-getting-hit-in-the-face work.

Despite his not having much to do with the plot, most of the film’s more expansive action set-pieces include Jackie Chan, including a cars vs. roller-blades chase which finishes in a major car pile-up that no doubt took much of the budget (and is an absolute hoot to watch!). Considering that, at least a solid chunk of the Lucky Stars actors don’t actually know martial arts, Hung does an impressive job of bringing them into fight scenes when needed.

Winners and Sinners might be essentially lightweight entertainment that prioritises gags and goofs, but it takes a lot of work to make something this genially warm and entertaining. Hung’s steady comfort behind the camera, allied with an innate sense of how to build both genuinely impressive action scenes and hilarious comic sketches, gives the film much of its easygoing charm and fluidity. That’s even more impressive when you consider that Winners and Sinners is structured as little more than a clothesline on which to hang some jokes and some action. Skill like that doesn’t come easy.

Winners and Sinners is released on Blu-ray as part of Eureka’s The Lucky Stars 3-film Collection on 22 March, with My Lucky Stars and Twinkle Twinkle Lucky Stars.