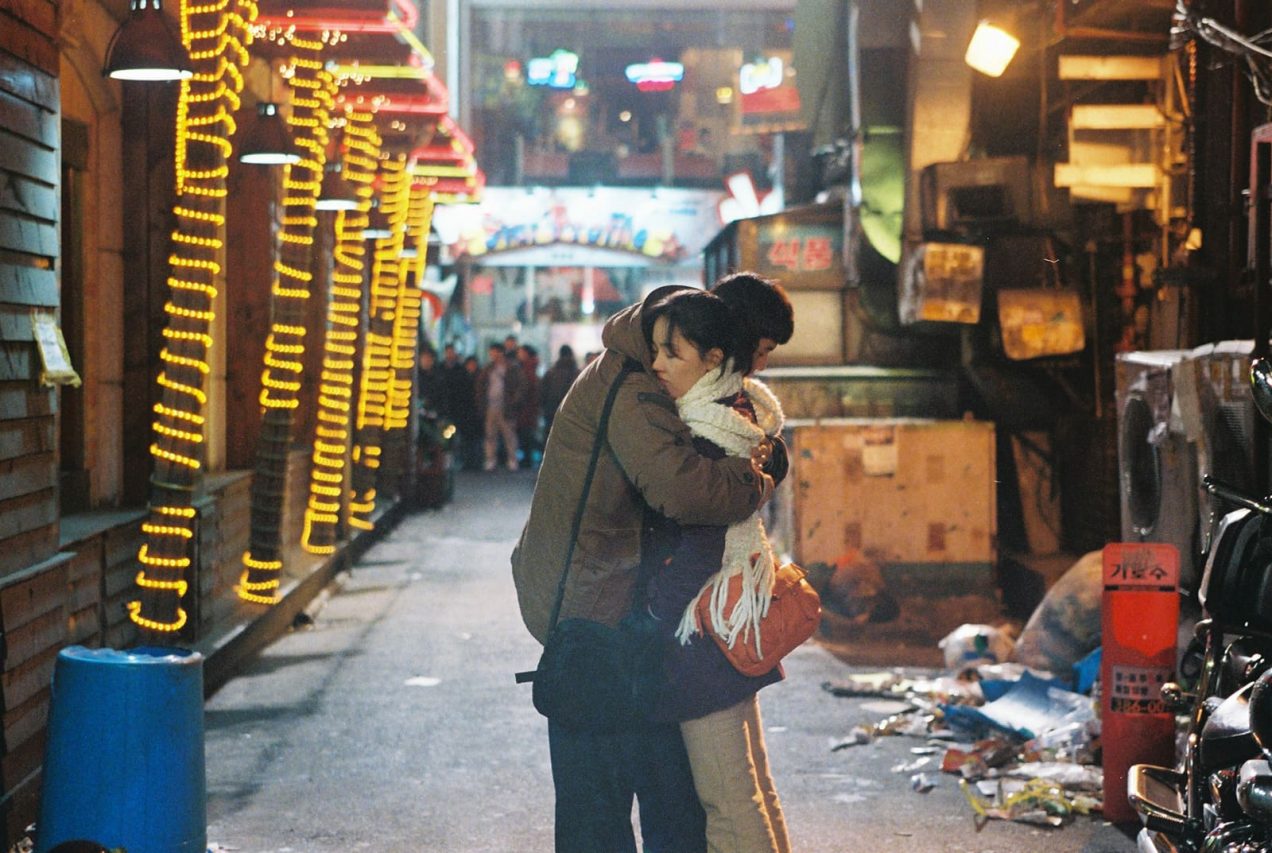 On UK Blu-ray for the first time, Hong Sang-soo’s fifth and sixth films provide a double dose of relationship missteps and woe…

To say director/writer Hong Sang-soo has been busy in the past decade is a bit of an understatement: in 2017 alone he released three films. His 22nd  – Grass – was released in February. So it’s interesting to assess Woman is the Future of Man (2004) and Tale of Cinema (2005), his fifth and sixth respectively, through the prism of his full body of work. As with most reissues now this double-bill comes packed with all sorts of extras including interviews, introductions (including one by Martin Scorsese) and original trailers.

Both play out in Hong’s typical low-fi style: simply shot, naturally lit and sparingly scored, with a strong focus on naturalistic action and dialogue. Many of the very fine actors are regulars in Hong’s films and In both, the plot centres around a young male filmmaker and their relationship with their friends and lovers, as do many of Hong’s works. Here we see the younger iterations of a character Hong has been developing for years but who, in more recent films, has become at least a little more self-aware and contrite than the one we see here.

In Woman is the Future of Man focuses on the relationship between filmmaker Kim Hyeon-gon (Kim Tae-woo, Joint Security Area,  Like You Know It All) and his old university friend and now university teacher Lee Mun-ho (Yoo Ji-tae, Oldboy). Catching up after many years, they decide after a few too many drinks to try and find Hyegon-gon’s old college girlfriend Park Seon-hwa (Sung Hyun-ah, Time). What Hyegon-gon doesn’t know is that Mun-ho started a relationship with Seon-hwa when he left for film school in the US. Both of them unceremoniously dumped Seon-hwa and we see these previous relationships in flashback, a common plot device in Hong’s films. Hyeon-gon moves to the US to further his studies, but also fails spectacularly to support Seon-hwa when she’s the victim of a terrible crime, while Mun-ho offers little more than casual sex can capitalise on Seon-hwa’s vulnerable state as her previous relationship ends.

Little has changed as the men have aged: there’s a hilarious scene in a restaurant where both men try (and fail) to chat up their waitress by using their job status as a hook. They congratulate each other on their success, but after a few drinks old rivalries bubble to the surface. And while the two old friends have gone on to reasonable success, when they finally catch up with her again, Seon-hwa has put away all her dreams of a career as an artist behind her. During a night of drinking (a common motif in Hong’s films) the two men reprise their old roles with their ex-girlfriend who generously welcomes them both back. But again, both treat her terribly. Arrogant philanderer Mun-ho sees her as (another) bit of light relief on the side of his marriage, while Hyeon-hwa’s still just as emotionally and physically impotent as he was as a young man, and flees at the first inkling he may have to provide support and not be the centre of attention.

In the new #MeToo era, the film’s subject may make some viewers uncomfortable – Seon-hwa’s own motivations and desires go completely unexplored and she’s simply a pawn in the two mens’ game of one-upmanship. All of the women in the film are pretty sketchily realised and one-dimensional but they still come off looking better than the two friends, who are distinctly unlikable. As a result, the film makes for uncomfortable and slightly unsatisfying viewing. Even though there is a sense that both men have got some kind of comeuppance, there’s no moral judgement or neat conclusion to neatly end the drama.

Tale of Cinema has a slightly more interesting plot device, but again the focus is on male neuroses and the failure to connect on an emotional level. It begins with the story of struggling student Sang-won (Lee Ki-woo) who reunites with a former girlfriend (Ji-won Uhm, Wish) and – in a rather strange turn of events – the pair agree a suicide pact. The attempt fails and when Sang-won tries to explain the anguish that led to his attempt, he is dismissed by his furious mother and races to the roof where he shouts and screams in despair. All that emotional hysteria is not at all director Hong’s style, so it doesn’t really come as a surprise when it’s revealed (spoiler alert!) that we’ve been watching a film within a film. The second half of the film begins abruptly with another filmmaker, Kim Dong-soo (Kim Sang-kyung, Memories of Murder, Ha Ha Ha), leaving the cinema where he’s been watching the action we’ve just seen at a retrospective screening of a successful former classmate’s films.

Dong-soo spots the actress from the film he’s just seen and starts to pursue her. He becomes increasingly infatuated and unable to separate the actress from her on-screen character. He relates to the film, he later reveals to the actress, because it’s his story, which he told his colleague in confidence. Or is he just trying to elicit sympathy? Dong-soo’s an untrustworthy character and unreliable narrator whose commentary is often at odds with what’s happening on screen. As with the men in Woman is… he’s emotionally immature, self-centred and hard to like: at a dinner with a group of old colleagues, he’s treated with suspicion and it’s clear he’s been badly behaved in the past. And again, the female character is much stronger and more certain of what she wants, a contrast most evident when the pair end up in bed together. Dong-soo doesn’t know what he wants and seems to be under the delusion that the actress will be the same character in real life as she portrays on screen – open, generous, warm and willing. Eventually, the actress tires of indulging Dong-soo and he seeks sympathy and forgiveness – for what it’s unclear –  at the bedside of the sick director. But has he learnt anything? Is he truly sorry, or just sorry for himself?

During the past decade or so, Hong has taken increasingly experimental approaches to telling these interpersonal stories, altering perspectives and timelines. These two tales, in comparison with some newer films, are much more linear. But they both have at their core helpless, emotionally stunted man-children who leave a trail of damage in their wakes. As a result, these are interesting films about the way men and women interact and their respective motivations, but watching them back-to-back might be a bit deflating.

Woman is the Future of Man, Tale of Cinema: Two Films by Hong Sangsoo is available on Blu-ray from Arrow Academy.

One thought on “Woman is the Future of Man, Tale of Cinema: Two Films by Hong Sangsoo”