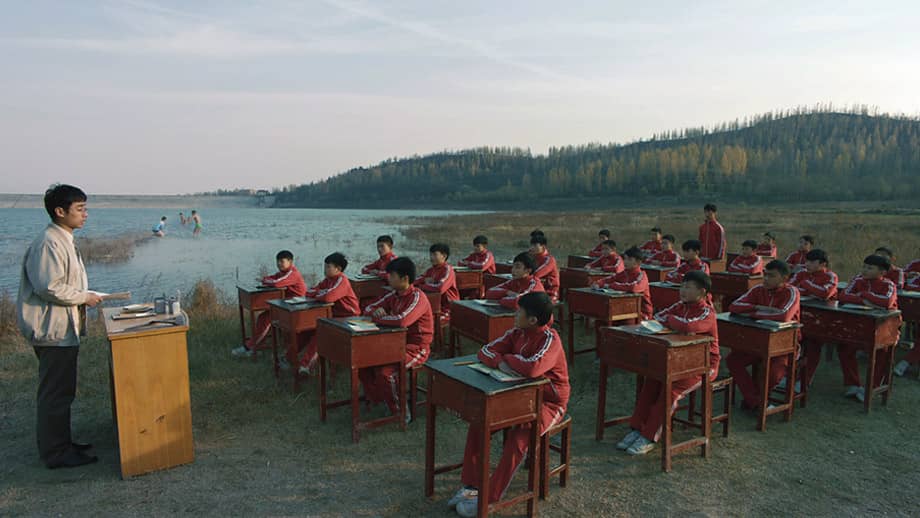 Lu Youhong cycles up a steep hill in the remote Henan province, struggling to keep the smile off his face as he breathlessly makes his way up. He’s excited for his first job as a teacher at the Zhige Wushu Academy, which he was given by his uncle after failing to be accepted elsewhere because of his lack of formal education. With the prospect of finally having validation for his capabilities, he gleefully accepts the role of Chinese teacher to a group of young, hopeful wushu-trainees who dream of being the next Bruce Lee or Jackie Chan. Even if they’re dedicated to their martial arts training, Lu can convince them that their academics are just as important, surely?

Hired as a figurative catfish, Lu’s role, his uncle tells him, is to upset the established order. Lu is just happy to have been given the job, and accepts the tough task ahead, even if he doesn’t quite know what that means. But, as he tries his best to appeal to the boys’ interests, he discovers it’s as much of an uphill struggle to help them understand the importance of Chinese literature as it was for him to reach the academy. Frustrated by this, he almost gives up completely until he finds one student, amongst the hundreds of disinterested boys, who excels at his academics. Zhang Cuishan hates Wushu, is horrifically bullied by his fellow students, and runs away from school every chance he gets. Seeing an opportunity, Lu decides to help the teen out for his own benefit, the teacher hopes.

Noch Jin portrays Lu as a delightfully docile teacher, a pushover who is immediately likeable as he bumbles through his day-to-day tasks and accepts extra duties like teaching the students English and Maths when he isn’t even trained for it. Lu is the perfect character to bring viewers into the story, since he is as much a fly on the wall at the academy as we are. While his unassuming attitude perfectly balances out the more extroverted teachers, and characters, that appear throughout the drama. Hou Yunxiao, who plays bullied student Zhang, is also an impressive talent in the film. With his moving performance as the tormented teen, Hou gives his character a vulnerability that immediately draws the viewers in and show sympathy for him.

Huang Huang’s directorial debut is a visually stunning, thought-provoking film. The filmmaker clearly has a keen eye for detail; his stunning cinematography telling a story through its vivid landscapes, while his use of slow-motion scenes, and dramatically choreographed training sessions adds to the beauty of the overall production. One scene, for example, sees the director transport Lu’s stuffy classroom full of students to a stunning riverside landscape, taken there to illustrate the beauty of an essay written by Zhang about his dream to be able to swim one day. It’s a brief, fleeting scene, but one that has a profound impact on the film’s impression on the audience.

For this to be his first feature is impressive and puts into perspective his talent as a director. At first, the story brings to mind other school-based dramas such as Dead Poets Society and Class, but it soon becomes evident that they cannot be compared. Wushu Orphan is a unique take on the genre, with a fascinating cast of quirky characters and stunning visuals. It’s an enjoyable watch, and, while sometimes a little slow, is able to captivate viewers with its unassuming yet charming narrative.

Wushu Orphan screens as part of the 12th CinemAsia Film Festival 2019 in Amsterdam.