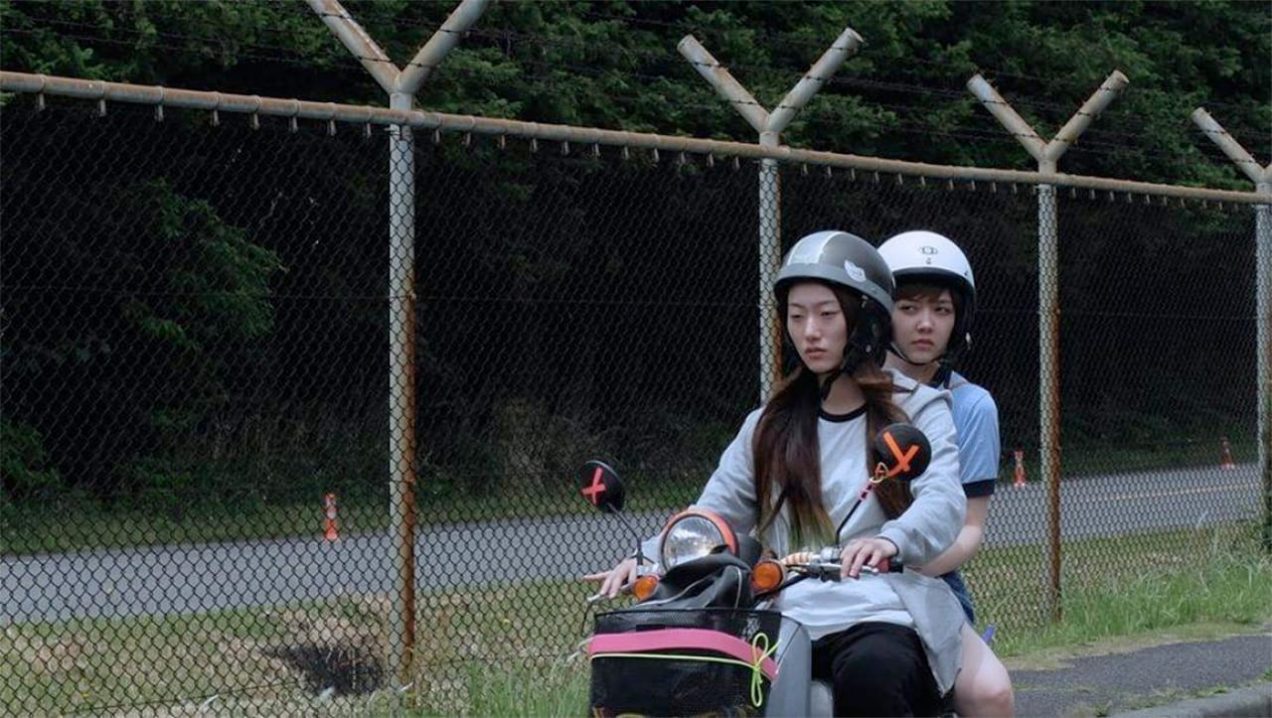 Who can you be when you’re scared of being yourself?…

From the first moment we meet Sakura (Hanae Kan), she is utterly alone. Sitting atop a trash heap in the middle of an obscure rubbish yard, she freestyle raps to give voice to how alone she feels surrounded by other people. In the town of Yamato City, she lives with her brother Kenzo (Haruka Uchimura), a lovable geek and her multi-tasking mother Kiko (Reiko Kataoka) and chafes under the conformity they extrude. A contradictory person, Sakura longs to escape the place with its bizarre, kafkaesque punks and wannabes and become a rapper like her American heroes. But at the same time, she resents the American air base that forms a large part of the cultural landscape of the city and is fiercely Japanese. Beset by perceived tyranny and inequity on all sides, she retreats to the safety of her abandoned RV and writes, plans and rebels as best she can. Her severe stagefright further re-enforces her isolation. So when Rei (Nina Endo), the daughter of Kiko’s unseen American boyfriend arrives to spend time with her father’s future family, Sakura’s position of isolation is pushed into the light.

Daisuke Miyazaki is a director that knows how to use what he’s got. Despite being an indie-looking film, the project is blessed by a number of things. One, he and his DP tread a fine line throughout the picture for the real and surreal. Sakura has nightmares, trauma induced visions and these are off-colour affairs where we know we’re in Sakura’s head but it’s not something that requires interpretation. The gateways into these places are postmarked by the dialogue and visuals before and after and they serve as release values for Sakura as she journeys deeper into herself and what’s bugging her more than her family and this interloper.

In the real world, Yamato is a town that constantly shudders with the drone of military planes coming and going, choppers circling endlessly. The characters never notice or if they do, they give the impression they’ve gotten used to it. So they go about their lives and retreat into the bleakness of rap competitions for some, online living for others. If you looked at the bleakness and surrealness of Hirobumi Watanabe’s And The Mud Ship Sails Away but removed the comedic aspects of it, you would arrive at the world depicted in Yamato (California). Another great thing going for the picture is Miyazaki’s cast are perfectly suited to the mental squalor they find themselves in. Hanae Kan blurts out at anyone who annoys her, throws things are her brother or others, disobeys her mother and rolls her eyes at her genial boss at the local restaurant. Possible an anagram of the Japanese people and their love/hate relationship with the US, Kan’s character would love America if it just didn’t live on her doorstep but without it, who would she be? Miyazaki’s not saying she’s wrong for not liking her life but he doesn’t say that life living with Sakura is easy or fair.

Haruka Uchimura and Reiko Kataoka as her brother and mother pull off the amazing task of being aware of Sakura’s limitations without feeling a need to let that compromise their love and respect for her. They love her despite of all she is angry about and they are not but they have lines they won’t’ cross for her and as the film goes on, we learn they are not indifferent about the blandness of their existence in this noisy, neon dripping enclave of resentment and politically required militarism. It’s just they’re not angry about the whole thing. They’re more concerned with their own happiness and the happiness of Sakura. Finally, the best part of the film is the arrival of Rei and the almost instantaneous reaction her landing triggers in Sakura. From ignoring her to learning about her through the challenge of Rei wanting to see what Sakura likes to do all the way through to the two young girls finding themselves looking across an ideological chasm at each other. Rei is the keyhole by which Sakura can see how the world outside the one she’s constructed for herself is and Sakura is the kind of cool, Japanese girl Rei wants to be. Rei is half Japanese and this trichotomy of being a local (Japanese), enemy (the hated American presence) and a friend (also an American) tears at her, threatening to destroy her friendship with Sakura who is also going through her own cultural separation crisis. Their emotional connection with each other and how they need each other to be themselves with each other and away from each other is tangible, strong and true even when the characters lie to themselves. The dialogue is exculpatory as they fumble toward understanding after spending time thinking that the one was educating the other in the conversation. It’s a marvel to find a script this simple and effective.

The best kinds of crisis in film usually have one lasting and defining moment that tests the hero to put up or shut up. Here, the simple prospect of singing in front of a community group is the crux that Sakura arrives at. Miyazaki starts by emotionally stripping her down after her fights with her family and her rejection of her friendship with Rei and having her survive her own personal endless night in the form of an assault and crawling through the local woods then builds her back up in a moment of self-actualisation in front of an practising band in a shack (played by the band GEZAN) where she finds out who she has to be. Really, I would have been disappointed in the film if it had gotten to this point and not been so honest. The cast handle this ending as effortlessly

An insight into the pressures every young Japanese person must feel in a world where realpolitik and pop culture have rendered meaning in the places we live or the institutions we follow, well, meaningless, Yamato (California) has heart, vigor and something to say in being aware of yourself when one can’t bring themselves to be true with one’s self.