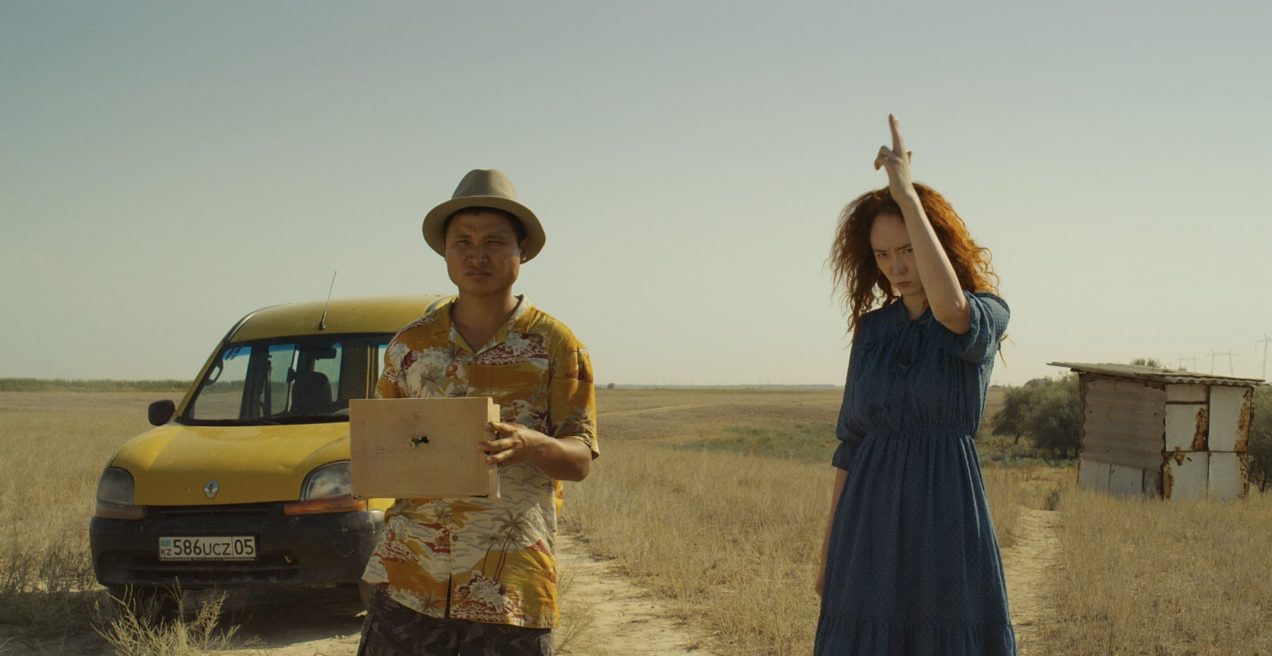 Ex-con Kermek (Azamat Nigmanov) with an obsession for Alain Delon and 1960s French cinema has a dream – to build a cinema in the mountains of Kazakhstan and play his favourite film Le Samouraï. The odds are stacked against him as his attempt to get an honest job is thwarted by his brother who pushes him back into the hands of criminals. On one of these jobs he meets Eva (Kamila Nugmanova), a prostitute and it’s their connection that sparks an attempt to escape their criminal circumstances with the gangsters in pursuit.

Echoing the romantic duo Clarence and Alabama from ‘True Romance’ the narrative is light on action but dense with dry, droll comedy that edges on the absurd. Nigmanov plays the hapless and oddly innocent Kermek with empathy and charm, while Nugmanova embodies the free-spirited Eva as the perfect balance to the duo. She is his main audience for impressions and pratfalls, a little more aware of the consequences of their actions than he is, his own eyes still enamoured with the idea of cinema, its reach from the past and other countries widening his internal horizon and imagination but blinding him to the practicalities of his life and situation.

Filmed in the beautiful wide-open steppes of Kazakhstan in a perfect widescreen format that accentuates the vast dry, hot landscape. Divided into seven chapters, the tiles illustrated in primary paints, you feel each one is tribute to a film, drawing in elements of modern cinema. In one scene where they shelter in a boat on the grass, it has an echo of the painting from ‘Good Will Hunting’, in another, they confront her step father a la ‘Natural Born Killers’ style, a red balloon is reminiscent of the childrens’ classic such as The Red Balloon.

Kermek and Eva are broken adults rediscovering childish joy through these flights of fancy, unable to really express themselves any other way, which makes the ending uncompromisingly brutal. A homage to the joy of cinema that unites us and defines us, it speaks to the power of the moving image and its fragility.