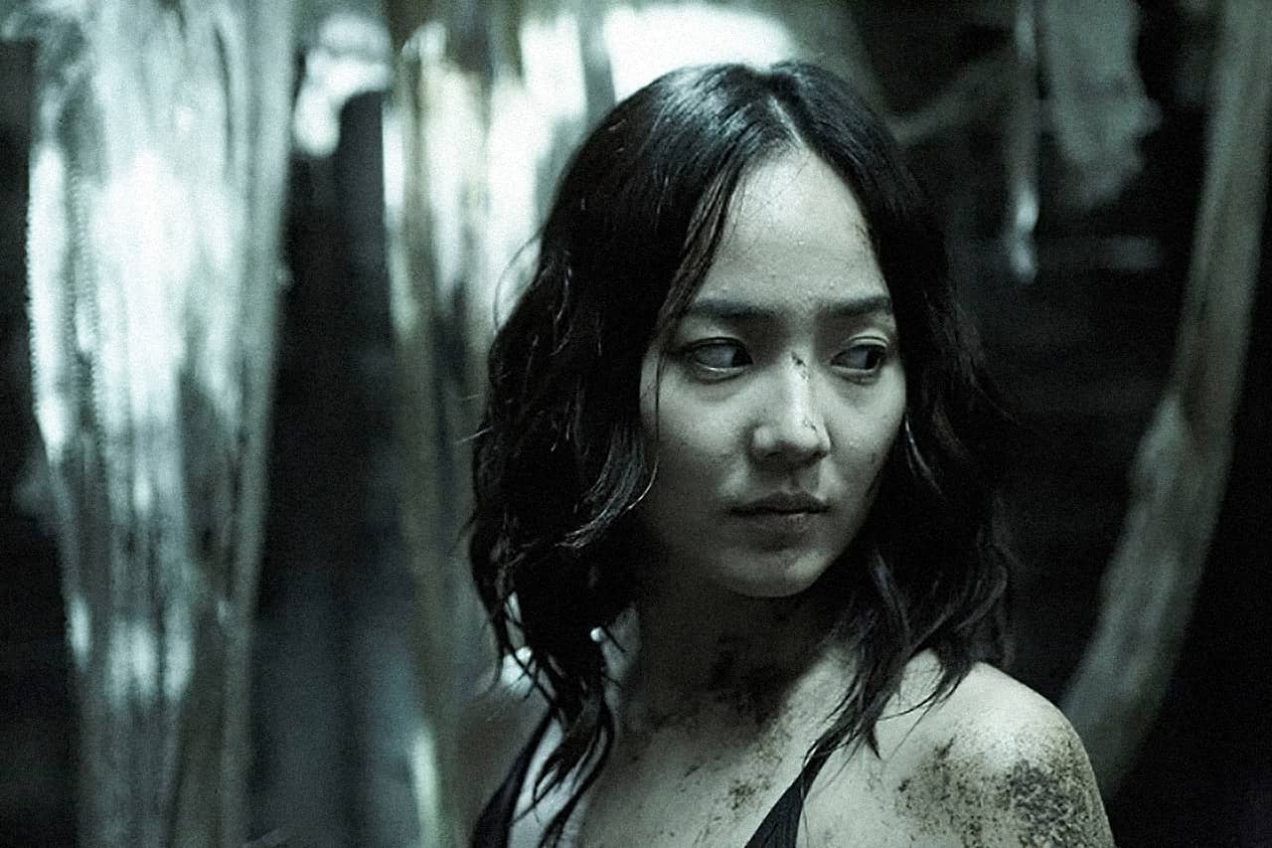 Korean ghost horror tackled some pretty wacky subjects in the early 2000s, having dealt with haunted shoes, musical instruments, and even wigs. In 2009, with not many options left, Yoon Jae-yeon took things a step further with Yoga, a film about supernatural stretching exercises, a premise sure to strike terror into the hearts of viewers everywhere. All flippancy aside, Yoon was certainly a proven success in the field, having helmed Wishing Stairs, and the film featured a very impressive collection of female stars, headlined by girl group member and popular TV actress Eugene, with Cha Soo-yeon (also in the disturbing Beautiful) in a creepy role, and with Park Han-byul (Wishing Stairs), Jo Eun-ji (The Villainess), Kim Hye-na (Red Eye), Hwang Seung-eon (A Blood Pledge), and Lee Young-jin (Memento Mori) in support.

The plot follows Eugene as Hyo-jung, the co-host of a shopping channel lingerie show. After she is bumped from her slot by a younger and more glamorous rival, she takes the advice of a newly beautiful friend and enrols in a week long intensive course at a strange, secluded yoga centre. There she and her four other classmates meet their stunning though sinister trainer (Cha Soo-yeon), who informs them that there are strict rules for the week, which if broken will have serious consequences. Soon enough, they find that she is quite correct, as they are tormented by threatening visions, coming to realise that their may be a heavy cost for the pursuit of perfection.

Perhaps unsurprisingly, although it does feature plenty of the titular activity, Yoga isn’t really a film about killer workouts, being another in the continuing line of Korean horrors dealing with vanity and the obsession with attaining perfect beauty. This having been said, the film is still a pleasingly bizarre and offbeat affair, and one which owes more to Italian maestro Dario Argento’s classic Suspiria than to other Asian horror or ghost tales of the period. Indeed, the film shows a greater focus on effect than on explanations, with director Yoon attempting to immerse the viewers in the surreal and eerie situation, with sense and logic taking a definite backseat to sinister atmosphere. Things certainly do get strange very quickly, with the yoga school being more akin to an old haunted house, an ornate and creepy place with red walls, old fashioned furnishings, cobwebs and unexplained whispering voices. Added to this the fact that nobody seems to actually know where the place is (why isn’t there a sign? Apparently “Those destined to come will find their way”), and the legend that only one of the women will be able to complete the course and meet the mysteriously unseen manager, and most viewers will be wondering from early on why the characters decide to stay, especially once their comrades start disappearing one by one.

To be fair, Yoon does a pretty good job of helping suspend disbelief and to distract from the inherent daftness of the premise, with the film’s atmosphere effectively keeping the audience in the dark and unsure what is going on. The film does seem to take place in a dream world, with the characters and the viewer cut off from reality and at the mercy of strange hallucinations. There is a subplot of sorts that seems to be heading towards revelations, with Hyo-jung’s boyfriend investigating a film director and a former and possibly dead actress who may have a connection to the yoga centre, though oddly this never really provides too much concrete reasoning for the film’s weirdness. This all works quite well, and the filmmaking angle, complete with flashbacks to a 1970s film set, is interesting, and adds another level rather than distracting. The film’s central mystery is all the better for being unfocused, building slowly in engaging fashion and although its obvious that there will be a twist forthcoming, it doesn’t arrive in the usual last act revelatory manner.

On a more basic level, the film does deliver a few frights, mainly during the later stages. There are a number of good creative and gruesome moments, and although there unfortunately isn’t much in the way of grotesque body twisting, the frequent yoga scenes are eerie enough in themselves, with some sinister snake-like sound effects and vaguely exotic music accompanying the stretching. The characters are generally simplistic and generic, serving mainly as yoga-fodder, and the film does throw in some pretty entertaining death scenes, which should keep fans happy enough. The film turns very weird and hysterical during the last half hour, and not necessarily in the way suspected, right through to its fittingly inexplicable ending.

Yoga really is a lot of fun, and one of the better Korean horror efforts of the late 2000s. Although not wholly defying expectations, it does offer something a little different and a touch more imaginative and crazy to the same old long-haired ghost scares or tales of supernatural revenge.