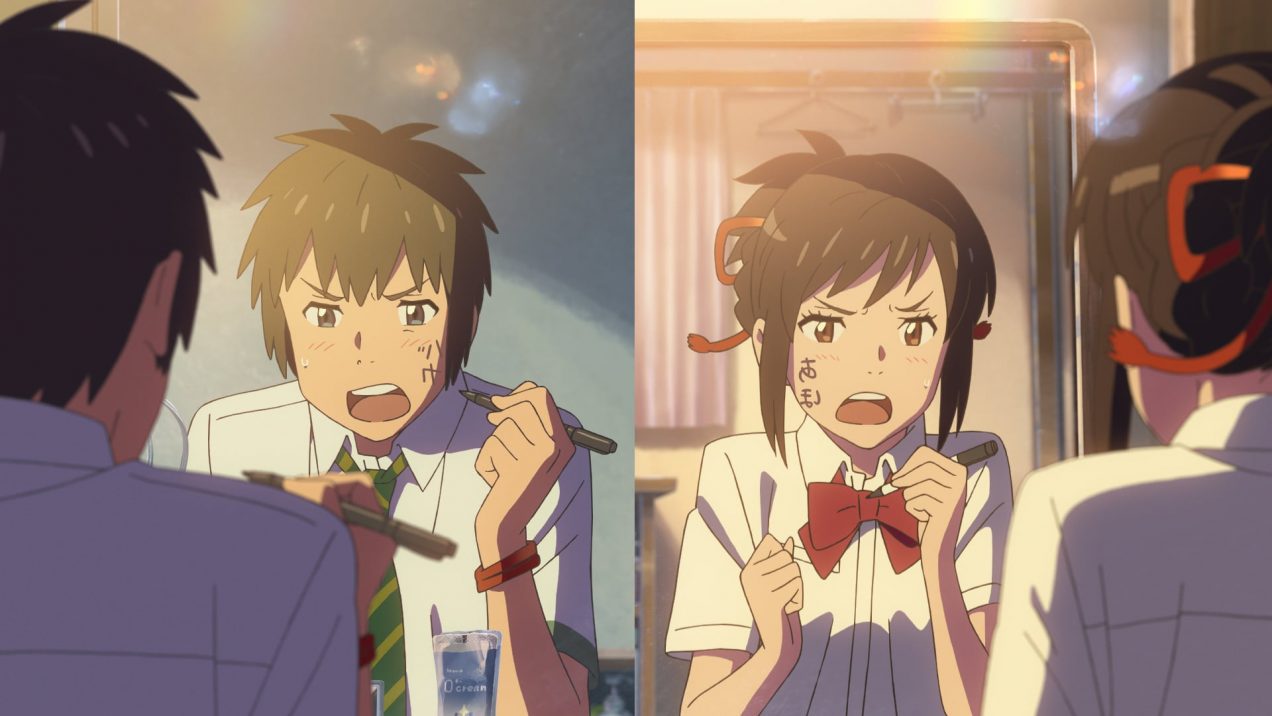 From a comedy premise, a serious story full of strong feelings…

Ah, the life of high school students in Japan. In her small country town, Mitsuha gets up, prepares breakfast for herself, her sister and grandmother, goes to school with her friends, and then carries on the centuries-old traditions at the her family’s shrine. In Tokyo, Taki gets up, has a quick snack while his father goes to work, then goes to school with his friends, and after that works shifts at a restaurant. Nothing special, we’ve seen these scenes hundreds of times.

Until Taki wakes up in a room he doesn’t recognise, in the body of a girl…

Until Mitsuha wakes up in a room she doesn’t recognise, in the body of a boy…

There’s a long and mostly unsavoury tradition of body-swap stories, where the first thing people do when they realise what’s happened is to explore their “new” body. Shinkai does not ignore that convention, but does not indulge in it either: a nod, a laugh, and it’s obvious that the focus of this story is different.

Mitsuha and Taki keep swapping bodies on random but frequent days. They have to learn to communicate and coordinate their lives, to not appear too out of it to their families and friends, even if they’re never in the same place at the same time, and the memories of their “other lives” fade quickly like dreams.

As if two young people learning about each other’s lives and seeing the world through each other’s eyes were not enough to build a great story on, Shinkai adds enough emotional depth and plot twists to affect even the most unfeeling audience. No, I’m not going to spoil the story for you: the buildup should really be experienced with all its surprises.  I’m sure the film holds up to multiple viewings, but the first time is magical.

Shinkai became justifiably famous back in 2002 with Voices of a Distant Star (ほしのこえ), and he’s been getting better ever since. He’s not only good at writing original, strongly emotional stories: he’s also good at choosing great artists and musicians, and you can see the fruits of these skills in Your Name. The gorgeous backgrounds set the mood of each scene and ground it in the two very different environments of central Tokyo and rural Itomori. The powerful music by Radwimps conveys the strength of the characters’ feelings and emotions. It all adds up to one of the most intense experiences I’ve ever had at a cinema.

Your Name is the best Shinkai movie to date, and I think everyone should see it, especially those (like me) who were a bit soured to his movies after the maybe-too-slow The Place Promised in Our Early Days and 5 Centimeters per Second.

Your Name comes to DVD, Blu-ray and Blu-ray Steelbook 6th November from Anime Ltd. Also available as a Deluxe Edition exclusively to Anime Ltd and Zavvi from 23rd November.

One thought on “Your Name”