In memory of Jō Shishido, this series looks back at 10 defining films and roles in his signature genre he had a massive impact on, from a few of his most famous to some virtually unknown in the West. Every entry begins highlighting a different aspect of his career, with #’s 10-6 for his greatest supporting G roles and #’s 5-1  for starring ones.

Part VIII: Kicking Ass. Joe’s stardom was no accident (unlike say, his Nikkatsu colleague Yujiro Ishihara who indeed became a superstar by complete happenstance). While not specifically planning out his emergence as a star, from the start Joe was more conscious of his image than most.

And he wasn’t the only one. While other Nikkatsu directors naturally preferred opportunities to direct films starring their most bankable heartthrob stars — Ishihara and Akira Kobayashi — that could sell records, posters, and photobooks about as easily as they could movie tickets, Seijun Suzuki earlier than anyone else recognized something special in Joe for the yakuza genre in particular. He saw it so early, in fact, that Joe was already being cast in the only significant gangster roles in otherwise non-gangster movies early in their careers, namely The Boy Who Came Back and Voice Without a Shadow. But Joe’s full potential wouldn’t become clear until 1963, when he would truly leave his mark on the genre — actually multiple marks, from punches, stomps, guns, bullets, razors….

“Talk or I blow those fingers off!”

As Tokyo police are investigating a suspicious lover’s suicide case involving one of their own amid a simmering gang war they have to worry about, meanwhile, an unknown underworld professional named Jōji (one of several roles in his career that would have names that could be shortened into his real name) is very forcefully “ingratiating” himself with the underworld. By demonstrating his prowess and ruthlessness on the hapless goons of both sparring gangs, Jōji makes himself highly in demand and sought after by both of them. But does he have any true loyalties?

It’s something of a recurring theme among Joe’s movies for him to set gangs or gangsters against each other — also see Revenge of the She-Cat Gambler. But this one goes further as an even nastier, more dastardly, more anti-heroic and more darkly comedic reimagining of Yojimbo in part, to the point it could be hard to imagine anyone else seeming villainous enough to make Jō look loosely heroic. Hard to imagine unless, that is, it’s the highly colourful and twisted assortment of rogues seen here, including a perverted knife-thrower who’s cruel to men and crueller to women but kind to cats, a fanatical older underdog leader of the smaller gang, a boss’ wife who airs dirty laundry with her husband to gang members and wants some dirty work of her own done over it, and “Hideo with the Razor Blade”. 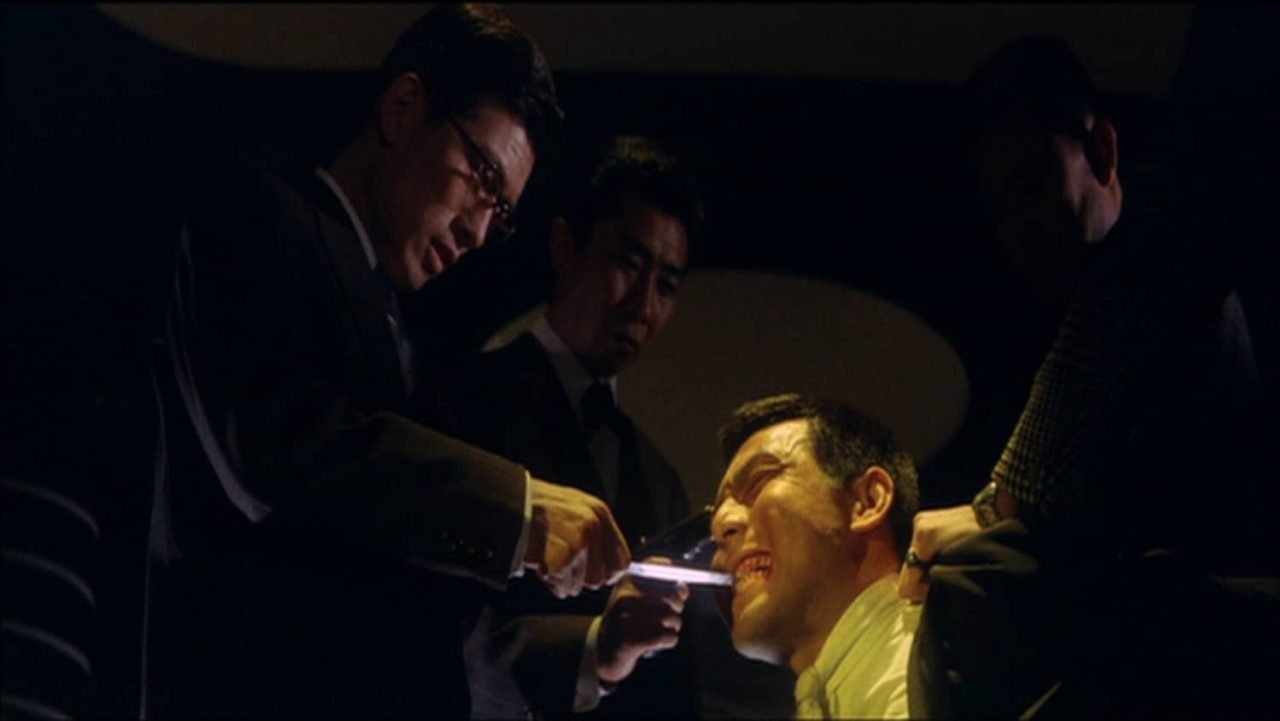 For anyone familiar with the usual almost conveyor belt-like production model     Nikkatsu entailed in the early 60s, just how much extraordinary but utterly unnecessary effort went into Youth of the Beast is very clear. As much and as hard as Nikkatsu tried to hold back excess creativity or imagination that could threaten their tried-and-true formula model (that’s actually not to be insulting it per se, as they did have an impressively prolific and distinct model that way), Suzuki and Joe were not content with that. It’s not just the witty dialogue, brilliantly choreographed action scenes and total disregard for previous good vs evil or honourable vs dishonourable thematic contrasts setting this one apart, but the technical verve as well. YotB established Suzuki as a master of colour composition and mise-en-scène.

Those were the very last kinds of things expected or even thought about for the average audiences coming to see films featuring people being bloodily pistol-whipped against a window as an all-but-naked exotic dancer gyrates on the other side — let alone for said visual prowess to be showcased through the composition of that very scene (all while not wasting a second in moving the plot forward). But Suzuki and Joe (whose screen presence including bulging cheeks and hunching back often made him the centre of such compositions) indeed made high art of such ostensibly lowbrow sensibilities, and in a manner so casually imaginative that even those who just came to see sex and violence could appreciate its sophistication just as easily as anyone else.

Has sex & violence ever been so succinctly and vibrantly epitomized in one picture?

So YotB erased any last question about Suzuki as a redoubtable auteur even when specializing in a genre that wasn’t known for having them at the time in Japan (as this was years before Kenji Fukasaku, Hideo Gosha or “Beat” Takeshi would make their names in it). But yet more importantly for audiences, it was the one that solidified Joe as an undisputed star of yakuza film — not just the sidekick or villainous foil to Kobayashi et al., and thank heavens no longer the “backup star” relegated to the fun but disposable asininity of movies like Danger Pays, or the standard-bearer of studio silliness Murder: Unincorporated.

After all, Joe would do more than just kick ass and take names here — though he indeed literally does a whole lot of both throughout his role with formidable gusto. In fact, he sometimes doesn’t seem to be able to do anything here without kicking ass or threatening thereof: not even presenting an employment offer; not even playing pachinko; not even making an order.

He had already become so well-versed and perceptive about the mechanics and appeal of the genre (something normally only expected of staff like directors and screenwriters) that by this point he was brainstorming himself beyond the confines of an action star. It was he who came up with a core idea of the film’s most creative and exciting set-piece, when he’s tied upside down by the antagonists determined to extract the last bits of information before bringing him to a horrible death. (Suzuki.)

For many directors collaborating with the same actor through numerous movies, by this point they would just rest on their laurels with potboilers or mild variations on what they kept doing before. But instead, with YotB Suzuki and Joe sought to expand the parameters and possibilities within their respective filmmaking and performance abilities as well as their studio and genre.

And that it certainly did, as YotB was one of Suzuki’s only projects that genuinely pleased everyone. It was the first where he was able to really able to roam wildly on the set and in the creative process (perhaps that was The Beast the movie was named after, as nobody had a definite answer), but before he’d get genuinely out of control with his later films. It was just as pleasing for Nikkatsu, who not only had a serious hit on their hands here but one that would inspire many more hits to come. Thus it was also pleasing for audiences who certainly got their money’s worth seeing this in theatres, though probably not even imagining it would later influence Hollywood and Hong Kong directors. And it was for Joe who delivered probably the busiest and most physically active role of his career, present, accounted for and kicking ass on almost every scene.

There was just one group by and large that this didn’t please — film critics both domestic and international, who wanted to think themselves above such lowbrow types of films altogether at the time. But even they would finally be pleased too, decades later despite no changes in content, to ironically be the latest of all in recognizing Youth of the Beast as the classic in the genre that it is.

Youth Of The Beast is part of the Classics strand of BFI’s Japan 2020, streaming now on BFI Player.

Join us every Sunday for the latest in Joe’s Baddest Gangster Hits.

For Nikkatsu’s 100th anniversary in 2012, John Woo had actually been set to helm Day of the Beast, an official remake. Sadly, it never came to fruition due to the losses of Woo’s project before it, The Crossing. Instead, Woo’s long-awaited return to his signature genre and style that Youth of the Beast helped pave the way for would be with a remake of another seminal Japanese crime film (but more so for Mainland China), Manhunt.