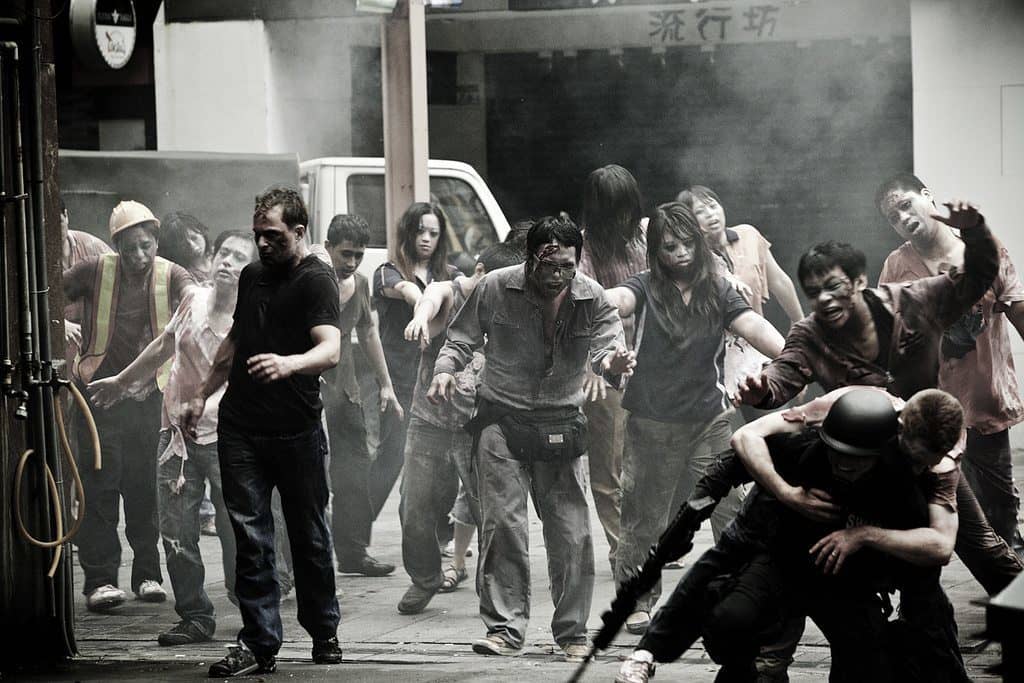 Taiwanese cinema finally came of age in 2012 with the country’s first ever zombie film Zombie 108, a full-on, balls to the wall piece of bad taste exploitation. The film was directed by Joe Chien, who had previously tried his hand at genre fare with the Francis Ng starring mystery Buttonman and the comedy-drama Gangster Rock, and who went on to serve up more zombie mayhem with Zombie Fight Club and to direct the Mainland Chinese horror The House That Never Dies: Reawakening. Interestingly enough, the film was funded directly by fans, with a campaign managing to raise a budget of NT$10 million and thanks in no small part to an amusingly over the top and decidedly NSFW trailer that whipped up a fair amount of interest on the internet, played a number of international festivals including the Brussels International Fantastic Film Festival, the Puchon International Fantastic Film Festival, and Terracotta in London.

The flimsy premise sees the Japanese nuclear disaster mutating a flu virus into something deadlier, unleashing the usual undead apocalypse on the world. This includes Taipei, where the government has been trying to prevent the spread of the zombie plague by creating a quarantine zone and sending in SWAT teams to evacuate civilians and wipe out the ghouls. Unfortunately, one of these police squads crosses the path of a violent mafia gang, and the two are soon at each other’s throats, until being forced to join forces to survive. Meanwhile, a bizarre perverted murderer (played by director Chien himself) uses the chaos as a cover for snatching more female victims, who he keeps chained up in his basement for his own sick pleasures. A young mother called Linda (model Yvonne Yao) has the misfortune to fall into his clutches while trying to escape the city with her daughter, and ends up in one of his cages awaiting a dreadful fate.

Zombie 108 really is an amazingly chaotic affair, almost to the point of complete incoherence. Although there’s no doubting Joe Chien’s enthusiasm for the genre, the film lurches around in disorientating and random fashion, throwing in characters and unrelated events seemingly on a whim. Dividing its time equally between the SWAT/gangster alliance and Chien’s pervert psycho, the whole mess frequently feels like two films stitched roughly together by some lunatic cinematic tailor, and very rarely makes anything even approaching sense. Even when the film makes some vague effort to pull things together during the final act, Chien can’t help but throw in more convoluted madness, with another character suddenly being revealed as a serial killer, for no discernible reason other than to notch up the body count even further. The tone is similarly all over the place, and it’s very difficult at times to tell whether or not the film is being played for laughs.

Of course, whether or not this matters is entirely down to the viewer, and Zombie 108 definitely delivers in other areas, serving up a nonstop barrage of carnage, gore and some genuinely surprising and sadistic nastiness. Though Chien handles most of the action with clumsiness, he at nevertheless shows a certain creative flair, and ensures that the film moves at a fast pace and is never anything even approaching dull. There’s a fair amount of brawling and gunplay, and the film benefits from the presence of genre veteran Tai Bo (whose career has seen him turning up in everything from Enter the Dragon to the Taiwanese film Spin Kid), along with real-life Taiwanese taekwondo athlete Chu Mu-yen and Hong Kong martial artist turned actor Dennis To (Ip Man). Despite its low budget, the film’s production values aren’t too bad, and the gore effects and zombie makeup are generally passable, enough so to make for a good number of effective money shots.

All of this is pretty much par for the course and makes for messily fun viewing, though what really sets the film aside from the more harmless splatter of some of its peers is a shockingly graphic line in sexual abuse. The film starts off harmlessly enough, with scenes of nightclub nudity, light lesbianism and a parade of semi-nude gorgeous women, though soon dives off into disturbing misogyny once Chien shows up as the hulking sicko deviant, complete with ludicrous latex makeup. Lumbering around and mumbling to himself in a manner reminiscent of Anthony Wong at his craziest, Chien pushes the film deep into Category III territory, with some outrageous scenes of humiliation, torture and rape as he works his way through a variety of naked females. Making things even more distasteful is the fact that all of this feels almost as if it’s being played for laughs, or at best for cheap titillation, the camera spending a great deal of time leering at and lingering on his victims’ nude, tormented bodies.

As a result, Zombie 108 really is an out of control film, and not always in the right way. Quite likely to baffle and offend in equal measures, it’s definitely one for a certain type of audience, though to be fair, this does seem to have been Chien’s aim – a gruesome, sleazy piece of old fashioned Category III style degeneracy which gleefully throws any kind of craftsmanship or storytelling to one side in favour of exploitative kicks. Whether or not this counts as a recommendation or a warning is entirely up to the viewer.